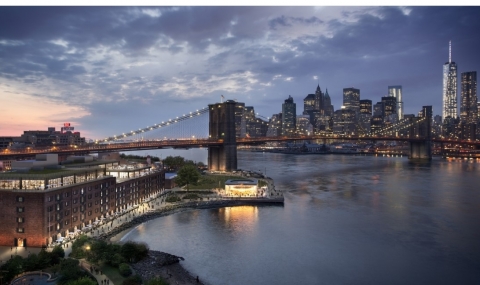 Represented DH Property Holdings in connection with a $7.1 million purchase of an industrial property located at 8401 Escort Street, Philadelphia, PA, which is adjacent to Philadelphia International Airport. The acquisition involved a joint venture with AIG Global Real Estate Investment Corp. and was financed by Ready Capital Commercial.

Represented DH Property Holdings in connection with a $37 million purchase of an industrial property located at 94-104 Glenn Street, Lawrence, MA, which houses a warehouse facility. The acquisition involved a joint venture with AIG Global Real Estate Investment Corp., and was financed by Ready Capital Commercial.

Represented DH Property Holdings in the acquisition, financing negotiations and ultimate $60 million sale of the purchase contract for a two-acre warehouse site at 150 East 52nd Street in Brooklyn, NY to the mammoth warehouse landlord, Prologis.

Represented DH Property Holdings in the sale to Brookfield Asset Management of a ground leasehold interest in 55 Bay Street, Brooklyn, NY, which is a distribution facility that our client developed and leased to Amazon.

Represented an affiliate of DH Property Holdings in the acquisition of an industrial development site on Columbia Street in Red Hook, Brooklyn.

Represented Rabina Properties in the financing and development of an 855,000-sq.-ft. fulfillment center for Amazon in North Haven, CT.

Representing Property Markets Group (PMG) regarding New York City’s rezoning study for the Gowanus Canal area. Herrick successfully completed a year-long review process at the New York City Planning Department to "certify" the Gowanus Canal public access plan – include a 20,000 sq. ft. shorefront esplanade PMG's development site at Sackett and Bond Streets. We are thrilled that PMG is one of the first developers in the Gowanus to gain approval from City Planning following the November 2021 rezoning of the area. This critical milestone and approval will now allow PMG to proceed with a Building Permit to allow construction at their site – providing the team with enough time to complete construction and qualify for the now-expired 421-a program before the final June 2026 deadline. The Development is currently planned to include 500+ units of housing, including a significant permanently affordable housing component, ground floor retail, and a publicly-accessible esplanade and open space filled with recreational activities, art, and amenities along the Gowanus Canal.

Represented an affiliate of Somerset Partners in the $7.5 million acquisition and financing of 9 Bruckner Boulevard in the South Bronx. The industrial site, which is situated opposite of Somerset’s planned residential development project along the waterfront, will be converted into a 30,000-sq.-ft. Bruckner Market food hall.