When the Bankruptcy Code was enacted in 1978, borrowers could discharge student loan debt if they waited until five years after it first became payable. That period was extended to seven years in 1990, but a change in the law in 1998 made that period indefinite, making student loans dischargeable only when there was undue hardship. Under Brunner and similar cases in other circuits, debtors rarely even attempted a discharge action and very few succeeded.

Rosenberg began borrowing money in 1993 for his undergraduate degree. After a stint with the U.S. Navy, he attended Cardozo Law School, graduating on his loans in 2005 with student loans totaling $116,464.75. Rosenberg made full and partial payments on his loans and obtained several forbearances on them. By November 19, 2019, with accrued interest and penalties, his student loan debt had grown to $221,385.49. In 2019, Rosenberg commenced a bankruptcy proceeding to discharge his student loan debt.

Under Brunner, debtors seeking to discharge their student loans must show that they cannot maintain a minimal standard of living if they are forced to repay their loans, and that situation is likely to persist for a significant portion of the repayment period. Debtors must also show that they made good faith efforts to repay.

Brunner lays out a three-prong test: (1) Would the debtor and any dependents be able to maintain, based on current income and expenses, a minimal standard of living? (2) Are there additional circumstances that indicate that this state of affairs is likely to persist throughout the repayment period? (3) Has the debtor made a good faith effort to repay the loan?

The debtor must first demonstrate an inability to maintain a minimal standard of living if he or she had to repay the loans. Bankruptcy courts calculate whether the debtor’s income minus reasonable expenses leaves enough to make payments on the student loan debt. The court found that Rosenberg could not maintain a minimal standard of living while repaying his student loan. The Rosenberg court emphasized that the first factor should focus on the debtor’s “current” income and expenses.

The second factor looks to the debtor’s future by asking whether his situation is likely to persist for a significant portion of the repayment period. Courts consider the debtor's job skills, age, health, the number of working years remaining and whether the debtor has maximized his income potential. In the past, this was a difficult standard to meet. Courts historically found that this factor was only satisfied when a debtor had persistent medical issues or a long history in a low-paying profession. This factor is more challenging for younger debtors because courts have reasoned that they can change jobs to improve their incomes. The Rosenberg court noted that this factor does not require a determination that debtor’s state of affairs will persist forever, but rather that they are likely to persist for a significant portion of the repayment period. The court found that Rosenberg satisfied this factor by noting that the repayment period for debtor’s loans had ended; therefore, his circumstances existed throughout the repayment period.

The third factor is the debtor’s good faith efforts to repay. Courts applying Brunner looked to all of the circumstances of debtor’s repayment history in assessing this factor. The Rosenberg court reasoned that courts should only consider the debtor’s prepetition behavior in repaying the loans and said courts should not consider a debtor’s reasons for filing bankruptcy, how much debt he has, or whether the debtor rejected repayment options. In other words, the Rosenberg court made this test more objective, rather than endorsing an analysis of the debtor’s motivations. The court found that Rosenberg made good faith efforts to repay his loans, based on his record of making some loan payments and actively seeking forbearance, finding that Rosenberg made 10 payments, in varying amounts, during the 26 months that he was responsible for making payments.

The Rosenberg court’s ruling is a shift toward a significantly more permissive judicial review of the §523(a)(8) standard. Prior to this decision, courts interpreted the requirement that a debtor show “undue hardship” as a high bar. As a result, discharging student loan debt in a bankruptcy was rare. The Rosenberg court rejected the “certainty of hopelessness standard” espoused in Brunner’s progeny, noting that standard had been created by case law and is not statutory language. If Rosenberg is not modified or reversed on appeal, the decision may lead more debtors to consider bankruptcy filings to discharge student loan debt and to greater exposure for lenders who make student loans. 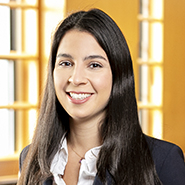