In bankruptcy cases, however, creditors cannot avoid transfers that are “safe harbored” under section 546(e) of the Bankruptcy Code. These safe harbored transactions include (i) a “settlement payment” or transfer “in connection with a securities contract” (ii) made by, to, or for the benefit of a “financial institution.”[2]

A recent Southern District of New York Bankruptcy Court decision in the Boston Generating[3]case demonstrated the breadth of section 546(e), finding that two debtors, as customers of a “financial institution” acting as their agent in connection with a securities contract, were “financial institutions” for (i) an intercompany transfer of lent funds between the debtors (ii) that ultimately funded a sizable distribution and unit/warrant redemption to investors. The case makes new law on the issue of who qualifies as a “financial institution” for purposes of the section 546(e) safe harbor and provides a new avenue of defense against fraudulent conveyance claims.

At the end of 2006, EBG Holdings LLC (EBG) and its main subsidiary, Boston Generating LLC (BosGen), underwent a leveraged recapitalization in which it (a) paid a $35 million distribution to EBG’s equity investors and (b) funded a $925 million tender offer to redeem certain EBG units/warrants. The distribution and the tender offer were funded by new loans totaling $2.1 billion.

The leveraged recapitalization proceeded as follows: in the tender offer, EBG units/warrants were tendered to a depository (the Bank of New York), which held them until BosGen and EBG instructed it to accept the tendered securities and pay investors.

BosGen entered into two new credit facilities, and EBG, one. BosGen transferred the funds from its new facilities to EBG’s Bank of America account. The funds from the EBG Bank of America account were transferred to another EBG bank account (with the Bank of New York), and then combined with the other facility funds to pay the distribution and unit/warrant redemptions.

On October 18, 2010, roughly four years after the leveraged recapitalization was completed, EBG and BosGen filed petitions under Chapter 11 of the Bankruptcy Code and subsequently confirmed a liquidating plan of reorganization, under which a trustee was appointed to pursue claims for the debtors’ unsecured creditors (including the leveraged recapitalization lenders). Utilizing section 544(b) of the Bankruptcy Code, the trustee brought New York fraudulent transfer claims to avoid and recover the leveraged recap’s (i) intercompany transfer (of $708 million of lent money from BosGen to EBG) and (ii) the $35 million distribution and $925 million unit/warrant redemptions (to EBG investors). The defendants included EBG investors who had received funds in the unit/warrant redemptions.

The Bankruptcy Court’s ruling dismissed the trustee’s complaint in its entirety. Herrick, Feinstein LLP represented a number of investors who were sued because they had received funds in the leveraged recap. We participated in the briefing before the Bankruptcy Court that led to the dismissal of the complaint.

The BosGen liquidating trustee sought to avoid two sets of transfers as fraudulent under New York law: (i) the two-step intercompany transfer (of lent money from BosGen to one EBG bank account, and then between EBG bank accounts) and (ii) the distribution and unit/warrant redemptions (to EBG investors). The defendants moved to dismiss the claims, asserting that the challenged transfers were exempt from avoidance as safe harbored settlement payments/transfers in connection with a securities contract made by, to, or for the benefit of a financial institution under section 546(e).[10] The trustee argued that the component transfers in the leveraged recap (particularly, the first transfer from BosGen to EBG’s Bank of America account) were not safe harbored and that the depositories did not act as the debtors’ agents in connection with a securities contract when they made the transfer.

The court examined the documentary evidence regarding the leveraged recap and the flow of funds to US Bank and the Bank of New York and found that an agency relationship existed between the debtors and the depositories. The court’s opinion also emphasized the importance of assessing the overall transaction (the leveraged recap) when determining whether transfers are safe harbored under section 546(e).

[10] Herrick represented a group of the defendants. 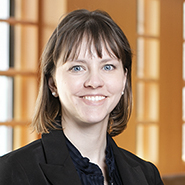