Tax counsel, Jacqueline Duval, was profiled in a piece for a special publication titled, Trailblazing Women Lawyers of Cornell Law School in September 2020. The article discusses the legacy of the Cornell Law School in Jacquie's family, strong ties to the university and the desire to do more and give more to the students of the law school.

The article opens with, "What drew Jacquie Duval ’92 to Cornell Law School in 1989, in addition to the school’s academic excellence, was the sense of personal connection she felt upon visiting. Her own connection to the school has endured over the years in a variety of ways and includes her three children: her eldest daughter, who was born in Ithaca during her 2L year; her son, Dylan Major, who graduated from the Law School in 2020; and her youngest, Rosalind Major, a current 2L."

The article goes on to discuss Jacquie's commitment to the social fabric of the law school while working with her daughter on these initiatives stating, "Jacquie notes that the creation of the Mary Kennedy Brown Society and its first Women’s Summit represent the culmination of a long-standing dream to celebrate the community and accomplishments of Cornell Law School women. Working with her daughter on the project, she says, has been wonderful. "She’s been an integral connection to the current students, and because of her efforts, we’ve had a great response from them.""

In the article, Rosalind Major says about her mother, "We work well together, and it is great to see her bring her idea to fruition and be supported by so many wonderful alums, administrators, professors, and students. Also, she always made space to allow for student interest to be heard and considered. I was really happy about the way we were brought into the conversations and planning."

The full article can be found here. 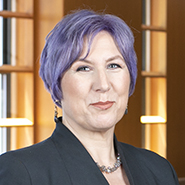