Is This The End For Geoffrey the Giraffe? Toys “R” Us Seeks Chapter 11

On September 18, Toys “R” Us filed a chapter 11 petition in the United States Bankruptcy Court for the Eastern District of Virginia; it also filed for bankruptcy protection for its Canadian operations. Readers may wonder: is the toy business in trouble? Not at all; according to data from the Toy Industry Association, U.S. toy sales are expected to increase 4.5% this year, with sales estimated to reach $21.3 billion. If the industry hits that number, it will be at least the fifth straight year of sales growth, as shown in the chart below: 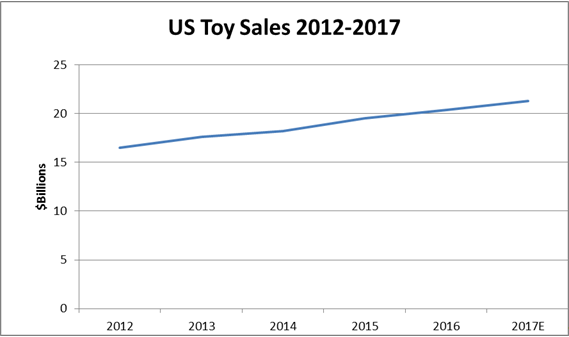 So what’s behind the woes of Toys “R” Us? The biggest story in retail this year is the continuing weakness of bricks-and-mortar stores. In a report issued in May, Credit Suisse estimated that 2017 will set a dubious record with the highest number of store closures ever recorded, with an estimated 9,600 stores expected to go dark by year-end, a number that did not include any store closings by Toys “R” Us. And while Toys “R” Us said that it did not anticipate store closings in the press release that announced its Chapter 11 filing, nearly all retailers that file for bankruptcy end up closing stores, in part because Chapter 11 gives management the opportunity to reject leases for unprofitable stores. Given the large number of stores Toys “R” Us operates, it is likely that there are some weak performers in the mix, so it is probable that Toys “R” Us will shrink its U.S. and Canadian footprint while in bankruptcy.

Toys “R” Us is also suffering from a changing retail marketplace. While Toys “R” Us ruled the toy business from the late 1970s through the 1990s, the last few years have been more difficult. Large retailers, such as Walmart and Target, have increased the depth of their toy business, leading to increased competition from other retailers who previously did not sell or concentrate on toys. But the real driver for change is the rise of e-commerce. Published reports say that e-commerce sales now represent 25% of U.S. toy sales, a percentage that keeps increasing as e-commerce grows its share of total retail sales. Analysts estimate that Amazon alone represents nearly 9% of all toy sales. When Toys “R” Us was in its heyday, the Internet didn’t exist and Amazon only sold books.

But the immediate cause of the Chapter 11 filing was a crisis of confidence on the part of the company’s trade vendors, which historically has been a risk for retailers, particularly as they build inventory levels for the holiday season. According to Toys “R” Us, in August it began negotiations with a group of its junior secured lenders regarding debt service relief. In its bankruptcy papers, Toys “R” Us acknowledged it sought “a holistic reorganization,” rather than getting the “Band Aid” relief it had previously obtained when facing debt maturities. In connection with that effort, it hired experienced restructuring attorneys and financial advisors. But when those discussions broadened to include the possibility of the junior lenders providing financing for a Chapter 11 case, the news leaked, and identified the new bankruptcy advisors. On September 6, the business press pounced on the fact that Toys “R” Us was considering Chapter 11, which soon became a self-fulfilling prophecy. According to the company, the reaction among the vendor community was swift and brutal: within a week nearly 40% of its trade vendors put the company on COD status and many factors and credit insurers withdrew support. Prior to this crisis, Toys “R” Us had experienced an historic average of 60 days of trade credit support; the new terms would have required an immediate infusion of up to $1 billion in new cash, money that Toys “R” Us neither had nor could obtain.

In its Chapter 11 filing, Toys “R” Us also acknowledged that it is struggling under the debt load it took on when it was acquired by a group of private investors in 2005. In that deal, a group comprised of Bain Capital Private Equity, LP, Kohlberg Kravis Roberts & Co. L.P., and Vornado Realty Trust purchased Toys “R” Us in a $6.6 billion deal, which resulted in the company taking on $5.3 billion in secured debt. In papers filed with the Bankruptcy Court, Toys “R” Us chief executive David Brandon admitted that the debt service obligations have harmed company’s ability to compete: “As a result, the Company has fallen behind some of its primary competitors on various fronts, including with regard to general upkeep and the condition of our stores, our inability to provide expedited shipping options, and our lack of a subscription-based failed to capitalize on the iconic Toys “R” Us brand and its unique position as a one-stop shop for toys every day year round.”

Although it admitted that its business needs to be rejuvenated, in its Chapter 11 filing, the company did not suggest that it would be liquidating, shrinking or selling its business. Rather, it hopes to use “hundreds of millions of dollars” from a proposed new $3.1 billion debtor-in-possession lending facility to improve its stores and operations. Nor was there any mention of store closings or withdrawals from unprofitable or less profitable markets. Debtors are often unrealistically optimistic at the start of their bankruptcy cases about what they can achieve in Chapter 11 and the level of goodwill they have banked with their creditors. The long experience of retailers in Chapter 11 suggests that very few of them are able to reorganize; most liquidate or are sold in bankruptcy.[1]

Even retailers backed by strong financial sponsors can stumble; a few years ago RadioShack went through a bankruptcy in which it was sold to its largest secured creditor. In its first Chapter 11 filing, Radio Shack closed roughly half its stores and claimed that the remaining stores were all profitable. Less than two years later, it was clear that the first reorganization had failed, and it sought Chapter 11 for the second time. While every case is different, and the Radio Shack experience doesn’t necessarily mean that Toys “R” Us will have the same result, it does underscore how difficult it is for retailers to recover from a bankruptcy filing.

Protections for Landlords and Trade Creditors

Given the weakness in the retail sector, what should creditors of retailers do to protect themselves? For landlords, they should review their leases and verify that their tenants are in compliance. If they are not, landlords can use verifiable breaches as a basis for negotiating an improvement in position, such as obtaining a letter of credit for some or all of the remaining lease term or obtaining an additional cash lease deposit. If the retailer does seek bankruptcy protection, the landlord must pay attention to proceedings in the case. Pursuant to section 365(d)(4)(A) of the Bankruptcy Code, a debtor has 120 days within which to assume or reject an unexpired lease. However, the bankruptcy court may extend this initial 120 day period for an additional 90 days “for cause.” A landlord who has a potential new user for the space occupied by the debtor, should also consider whether to oppose a debtor’s request for additional time in which to assume or reject its leases.

For trade creditors, the issues are more complex and require a higher degree of alertness. As the Toys “R” Us situation demonstrates, a troubled retailer’s trade credit can deteriorate very rapidly based on market information or rumors. Under the Uniform Commercial Code, a trade creditor who is concerned about the creditworthiness of its customer has the right to require reasonable assurances of getting paid for its goods. If the creditor makes such a demand and does not receive adequate assurance of payment, it is entitled to stop goods in transit or demand a return of its goods. In addition, creditors selling on purchase orders or open invoices are free at any time to impose new terms, which may include shortening trade terms, requiring cash on delivery, or even payment in advance. There are other alternatives for trade creditors; they can sell their receivables on a no-recourse basis to a factor, or, if the retailer is large enough, obtain credit insurance or purchase a credit default swap. For retailers who seek bankruptcy protection, the Bankruptcy Code provides creditors with an administrative claim for goods shipped to a debtor and received within 20 days prior to the commencement of the bankruptcy case. Of course, before making demands for enhanced credit support, a trade creditor should consider whether cutting off trade credit will actually accelerate a retailer’s financial crisis.

The Outlook for Toys “R” Us’

Time will tell whether Toys “R” Us will succeed with its aggressive and optimistic plan to restructure and survive Chapter 11. But the changing nature of the retail marketplace, which has been rocked by a rolling tsunami of retail bankruptcies since the beginning of 2015, shows no signs of stabilizing. As surprising as the news of the Toys “R” Us filing was, there are persistent market rumors that other major retailers may face a similar fate. In light of this turbulence, landlords and suppliers to retailers need to remain vigilant about the financial health of their retail tenants or customers, and be ready to act to protect their interests when necessary.