Spoofing is a deceptive trading practice which has recently subjected offenders to both civil and criminal liability. True to its name, “spoofing” is the practice by which a trader gives the false impression of market depth and demand. For example, a trader could place buy orders on one side of the book, and then several sell orders on the other side at different prices. This strategy is designed to induce other orders that will be executed against the original order at a higher price than the trader would have otherwise obtained without the layered orders, which are subsequently cancelled before execution.

In 2010, the Dodd-Frank Act explicitly prohibited spoofing with the addition of a provision in  the Commodity Exchange Act (“CEA”). The provision specifically states:

It shall be unlawful for any person to engage in any trading, practice, or conduct on or subject to the rules of a registered entity that a) violates bids or offers; b) demonstrates intentional or reckless disregard for the orderly execution of transactions during the closing period; or c) is of the character of, or is commonly known to the trade as, “spoofing” (bidding or offering with the intent to cancel the bid or offer before execution).

In the seminal securities spoofing case against Richard Kenny and twin brothers Behruz and Shahryar Afshar, the SEC alleged that the trio of traders committed fraud in connection with a pair of options trading schemes – namely, by “spoofing to generate liquidity rebates from an options exchange.”

For their alleged spoofing, the three traders were charged with violating “Section 17(a)(1) and 17(a)(3) of the Securities Act as well as Sections 9(a)(2) and 10(b) of the Exchange Act and Rules 10b-5(a) and 10b-5(c) thereunder.” On June 13, 2016, the respondents consented to the entry of an order finding them in violation of the statutes. Each was ordered to cease and desist from further violation of the provisions, and they were also subject to disgorgement and civil penalties totaling more than $1.89 million. Bahraz Afshar and Kenny were likewise barred from the securities industry.

With three convictions in the past three years alone, the Justice Department has sent a loud and clear message that spoofing is a criminal offense, and the offenders will face criminal prosecution.

On October 1, 2014, New Jersey commodities trader Michael Coscia became the first person prosecuted under the Dodd-Frank anti-spoofing provision in the CEA. Coscia was alleged to have “devised, implemented and executed a high-frequency trading strategy in which he entered large-volume orders that he intended to immediately cancel before they could be filled by other traders.” The indictment further alleged that Coscia “create[d] a false impression regarding the number of contracts available in the market,” designed computer systems to carry out his scheme and realized a profit of approximately $1.5 million. The indictment came after Coscia had already settled civil allegations related to his scheme with US and UK regulators, through which he paid $3.1 million in fines, agreed to the disgorgement of profits and accepted a one-year trading suspension. On July 13, 2016, an Illinois federal judge sentenced Coscia to three years in prison for his conviction on six counts of spoofing and six counts of commodities fraud in November 2015.

In November 2016, British day trader Navinder Sarao, whose activities are alleged to have contributed to the May 6, 2010 “Flash Crash,” became the second person convicted of commodities spoofing.  Sarao was accused of “spoof[ing] the market and maniuplat[ing] the intra-day price for near month E-Mini S&P 500 futures contracts . . . on the . . . CME” through the use of an automated trading program over a period of five years between 2009 and 2014.  Sarao is awaiting sentencing. In the related civil suit brought by the CFTC, Sarao agreed to pay $25,743,174.52 in civil monetary penalties and $12,871,587.26 in disgorgement. Sarao also received a permanent trading and registration ban.

The Justice Department’s most recent case against trader David Liew promises to breed further indictments, given Liew’s agreement to cooperate with authorities. On January 3, 2017, the Justice Department filed its third-ever criminal spoofing case against Liew, a precious metals trader. Unlike the earlier criminal spoofing cases, Liew’s is the first involving claims of coordinated spoofing, including allegations that traders at some of the world’s largest banks conspired to manipulate precious metal markets. On June 1, 2017, Liew, who also settled a parallel civil suit brought by the CFTC, pleaded guilty to one count of conspiracy to commit wire fraud and spoofing, for which he received a lifetime ban from the industry. He is currently awaiting sentencing, but is expected to receive a relatively lighter sentence compared to his spoofing predecessors, given his agreement to cooperate with authorities in investigating and prosecuting other “spoofers.”

Coscia further claimed that the anti-spoofing statute encourages arbitrary enforcement since high frequency traders cancel 98% of orders before execution. The Seventh Circuit likewise made short shrift of this argument, explaining that spoofing requires “an intent to cancel the order at the time it was placed.”

Stated simply, the Seventh Circuit’s finding that the “anti-spoofing provision provides clear notice and does not allow for arbitrary enforcement” will only serve to embolden investigators and prosecutors in their pursuit of anti-spoofing violations. 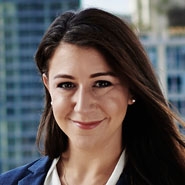 Real Estate and Covid: A Tale of Two Cities

In this opinion piece, two Real Estate leaders discuss the state of the market in both the UK and the US as we begin 2021.

Herrick's Israel practice was recognized and tied in the number two spot for Real Estate deal volume, with fourteen deals relating to and working with our...

Herrick is pleased to announce the arrival of partner Karol S. Robinson and special counsel Brett J. Gottlieb to the firm.