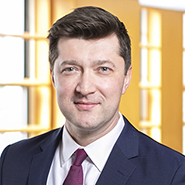 George has handled domestic and cross-border reorganization and liquidation cases filed under Chapters 7, 11 and 15 of the U.S. Bankruptcy Code, as well as pre- and post-petition investigations and litigations requiring the expertise of independent insolvency counsel.

Further, George has assisted high-net-worth and politically sensitive individuals in cross-border disputes arising out of civil fraud or white-collar criminal allegations, investigating their use of offshore structures and opaque asset/corporate structures, as well as protecting their assets, liberty, and reputation.

Born and raised in Belarus, George is a native Russian speaker and is often asked to assist in matters arising out of the Russian Federation and the Commonwealth of Independent States, Ukraine, as well as the Baltic states.

Before joining Herrick, George managed his own firm and practiced law at Kobre & Kim LLP and at Arent Fox LLP. Earlier in his career, during the 2008 financial crisis, George clerked for the Honorable Mary F. Walrath of the U.S. Bankruptcy Court for the District of Delaware.

George holds a Juris Doctor (JD) degree and Master of Laws (LL.M.) degree in Bankruptcy from St. John’s University and is a frequent writer and speaker on bankruptcy law issues.